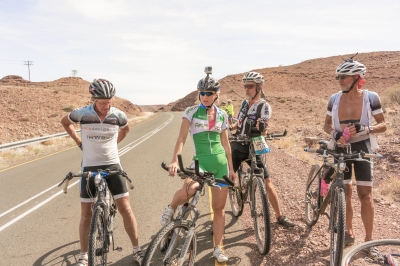 
Cycling is an activity that requires the working of an individual’s limbs in complete synchronization. The movement of the legs serves as a form of exercise. It helps to increase the body’s metabolic rate, burns fats and helps to lose calories. This activity involves the use of bicycles for a variety of purposes such as sport, travelling, recreation, etc. Hence, it is known as cycling. When people undertake this activity as a full-fledged profession, they are known as cyclists. Cyclists also belong the category of sports persons. Cycling is not restricted to the use of two wheeled bicycles only; it may also refer to the use of powered vehicles such as tricycles, unicycles, quadracycles, etc.

1. They may not be good mechanics – People are often of the opinion that since cyclists spend so much of their time on their cycles while practicing and taking part in tournaments, they must be good mechanics as well. This notion emerges from the fact that people only watch cyclists riding most of the times. Therefore, it is taken for granted that the cyclist is able to repair his/her cycle in case of any trouble. Another reason that supports this kind of an opinion is the fact that people think that cycle is smaller in size, hence it is not as complicated as other vehicles and does not need a mechanic to look into its functioning separately. Instead, it may come as a surprise for some people that most cyclists can only do the bare minimum tasks related to repair such as changing a flat tyre.

2. They don’t always ride fast – Since, cyclists take up cycling as a profession, they have to take part in races and tournaments, which serves as their source of income. They go through rigorous training on a regular basis in order to increase their speed and improve their skills. Due to this, people often come under the influence of a misconception that since cyclists undergo such hard training, they can only ride at high speed. Moreover, this idea is validated by the logic that even their normal pace will be of a much greater speed than a non-cyclist. This is not true. When they are riding for recreational purposes or riding along with others, they can slow down and cycle at a normal pace.

3. They too feel nervous – Cyclists take up cycling as a profession. They are seen as experts in their field. This is due to the years of experience, practice and training that they undergo for the sport. The common idea that prevails is that professional cyclists do not feel nervous owing to their expertise. However, the truth is that they too feel nervous before a race starts. This nervousness does not merely emerge in case of a tournament or a race being held at a grand level but also for races that cover smaller distances. Many cyclists have also stated other interesting reasons such as competing in one’s own home town or competing against someone who is known personally, as the cause of their nervousness.

4. They have a serious coffee requirement – There are less than few professional cyclists who are not in the habit of consuming coffee at intervals. It is not only the common public who decide to treat themselves to coffee before or after a cycle ride, professionals too are in the habit of having coffee. They often carry their coffee supply and coffee making equipments to cater to their needs on the way. Most cycling teams have coffee machines at their disposal at all times during a tour. Cyclists as well as their teams often have coffee companies sponsoring them. It is rarely ever that a cyclist is not in the habit of consuming caffeine.

5. They eat a lot – People are often deceived by the lean and fit appearance of cyclists. They may also think that they are strictly on diets that induce weight loss, to be able to ride easily. However, this too is a gross misconception as most cyclists have been observed to be eating large quantities of food. Thinking of it logically, a cyclist eating in large quantities is justified because of the kind of work they do. Cycling or training causes the body to exert a lot of pressure, the body’s metabolism increases and food is converted to energy at a faster rate. Hence, cyclists eat in larger quantities than people might expect them to have. People should not be fooled by their lean frames because they work out rigorously so that the quantity of food they eat does not show on their weight.

6. They spend a lot of time away from home – Being professional cyclists, they are almost always participating in events, races and tournaments that may be held in various places. A lot of international races also take place which means that they spend a lot of time away from home. Though they may be sponsored and many of them may have a celebrity status in the field of sports, but they also have to cope with changes. Travelling far and wide across place which requires them to adjust to situations that they may not be comfortable in. However, they continue to keep up with their training to continue with good performances.

7. They spend less time working – Cyclists who train for international tours spend about 30 hours a week working, while those who work at a normal desk job spend lesser time on a weekly basis. However, it should be taken into consideration that although they lesser time working, their job demands extreme physical exertion. Furthermore, they also have to juggle with other miscellaneous tasks along with training such as medical appointments, massages, travelling, attending sponsored events, etc. These are not regarded as part of the individual’s work; hence the time calculated as their working hours is comparatively less.

8. They were also beginners – It is difficult to believe that professional cyclists could have faced the same trials and tribulations that any common person faces while learning the ropes of cycling. Like any other person, these professional cyclists were also beginners at some point of time. They too fell down, bruised their knees, experienced aches, pains, fractures, muscle pulls, etc. They were not always experts in their fields. Their immense dedication, training and practice qualified them to take up cycling as their profession. At the very beginning they went through the same struggles that everyone else faced.

9. They have a phobia of germs – In general all people want to have a happy and healthy life. Everyone stays away from situations that could make them vulnerable to certain illnesses. However, in the case of cyclists this fear of germs is heightened in a major way. This is also because their performance is dependent on their health and well being to a large extent. Therefore, they tend to be more careful and weary of situations that are prone to causing them to fall sick. This fear of germs makes them take extra care of the health and hygiene facilities available to them in terms of the food they eat, soap and sanitizers used to keep them clean, etc.

10. They do not make a lot of money – As glamorous and fun as it may sound to choose a recreational sport as one’s means of livelihood, cyclists do not get paid a lot or as much as individuals belonging to other sports. The wage gap is evident between men and women where most women cyclists are underpaid and sometimes end up participating in international events at embarrassingly low salaries. However most people continue to make a living out of it despite the tight budgets and difficulty in getting sponsors because of the mere dedication and love for cycling.

Other than the points mentioned above some other surprising things that cyclist do are carrying heavy baggage along with their bicycle and equipments, because of which they often try to work out some sort of an adjustment with the gate agents to be able to exempt their extra luggage from charges. They also shave their legs so that it is easier to clean and wash off the gruel that accumulates on their body during long and tedious rides. They do not have special equipments, although their bikes may be designed specially but their tyres are just as prone to becoming flat as any of ours.

Whether you use an exercise bike in a gym or you’d rather take your bike into the great outdoors, long rides can be uncomfortable. The seat, sometimes known as the saddle, on most bikes lacks sufficient padding for some hardcore applications. By adding amazon bike seat over your current saddle, you might find that you’re more comfortable on your bike. The culmination of all of the benefits of gel pad bikes seats is a longer, more comfortable rides.

All in all cycling is a fun experience whether it is for those who partake in it for recreational purposes or as their profession. However, it is great to know and be able to debunk some of the common notions attached to professional cyclists. Breaking these stereotypes prove to be encouraging for aspiring cyclists to be able to learn and improve their skills. Before you leave click here to look at some of the best bicycles for you