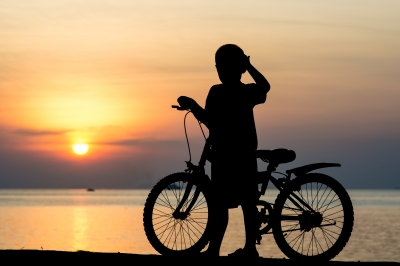 
The artists, inventors, designers and creative individuals along with their home-crafted cool inventions and products are literally transforming the way one looks at being a professional cyclist in the recent days. It has been a sort of passion for the professional cyclist to build apparatus by themselves that serves their customized needs. This article will be talking about some of the visionaries and their breakthrough products such as functional and beautiful clothing to museum grade helmets.

1. Leh Cycling by Carson Leh
Carson Leh was always on and around bikes during his childhood days. When he was in his early 20’s he knew he had to find a fix for the frequently wearing out saddle on his bike. While looking around for something unique he turned his attention to leather, decided to make a saddle for himself and ended up with one whose picture accidentally ended up in a popular blog dedicated to BMX. As soon as the word spread, there was viral demand for the custom saddles and by the late 2011 Leh ended up with a budding business on custom leather saddles for bikes.

2. Ellie Lum, Klum House
A former bike courier by profession, Ellie Lum was one day struck by the idea of making customized bike courier bags and selling the same by the end of the year 1998. She was always looking for a bag that is absolutely off the shelf. She believes that originality is something that shouldn’t be negotiated if someone wants to be offbeat and quirky in terms of fashion which expresses and individual’s eccentric style. She, along with her friend Roland Burns founded the company R.E.Load which provides the bikers with customized messenger backpacks and other related biking accessories such as bottle holders, wallets etc.

3. Attack the Pack Card Game by Ben Broomfield and Ben Nickolls
Ben Broomfield and Ben Nickolls during a trip to their favorite snowboarding resort started out by exploring the ins and outs of game making. They wanted to make something dedicated to the professional cycling world, as both of them were mad about cycling. They wanted to opt for something that is not virtual, can’t be deleted by the single click of a button and is something an individual can actually feel. The resulting factor of all those brainstorming sessions was the creation of the card game of some luck mixed with a little bit of strategy. This involves the players to assume the role of the leader of a pro-biking team whose goal is to get one among his riders to cross the chequered flag first. It may sound easy, but it is not as it involves real life scenarios such as overcoming the elements, navigate through the ever-changing conditions of the road, rider fatigue etc. This has gained immense popularity among the pro-bikers as well as the biking enthusiasts while they are chilling in their favorite coffee shop.

4. Steel Spine Bike Stand, J.R. Blake
A professor, an artist, and a graduate student at the San Diego University, J.R. Blake found that his hobby and specialty lies in the art of making bike stands. According to Blake, these stands are not just meant to store your bike, but a statement that sends out the message that your bike is important to you. He initially intended to make something minimalistic that his friends have been asking from him for a long time. Blake now makes handcrafted and machined steel spike stands which consists of about 5 to 10 pieces per batch. He is not in the game for the money, he believes it is the simple way by which he can connect to the people and convey the simple message of the benefits of biking.

5. Chuey Brand by Kachusha Munkanta
While on his trips to watch Tour de France, Kachusha Munkanta was fascinated by the range of colorful hats the bikers wore before they embark on their journey. While others were busy watching the athletes competing with each other, Kachusha was busy collecting his favorite caps. One day he decided to make one of his own. He deconstructed baseball caps, military hats, and other related headwear to understand the tools of the trade. He then ended up with one of his own hand-stitched biking caps. He later on invested more hours in his venture and ended up with a batch of custom hand-made hats and decided to sell them to the local biking stores. They were and instant hit and now he owns an independent brand that supplies the biker community with custom made biking hats that keep their head warm when the temperature drops.

6. Inkwell Helmets by Danielle Baskin
28-year-old Danielle Baskin is a painter by profession but she prefers the term ‘inventor’ since the same sounds really cool! She has the perspective to change the headgear industry by providing the bikers with designer headgears that at least didn’t look like the dull options available in the generic market. She came up with the idea to start off her own business the day when she was riding her way to work in the year 2007, in New York. Her gradual dislike towards the mundane headgear options compelled her to take out her paintbrush and paint some puffy clouds on the same and lo! There she had the next reason to quit her job and be her own boss! Her friends were the motivators to make her start her own business when they started asking her to supply them with custom painted lids and other bike components, and within a matter of months, Inkwell Helmets was a buzzing business at the heart of San Francisco.

7. Paul Components by Paul Price
Paul Price grew up being an avid fan and rider of skateboards. He loved to open things apart and see the way they work. He always wanted to come up with his own company and be his own boss and later after acquiring a degree in mechanical engineering in the year 1989 from Sacramento State University, he started up a shop in his own garage and came up with his first machined seat post with fully adjustable skewers. He then hopped in his car and went to Sacramento to sell his wares at the local bike shops. Today he owns his own brand Paul’s components that are a well-known brand that offers aftermarket components to the bikers around the world.

8. Riyoko Apparel, Kristi Woo,
Kristi Woo is the creator of the Riyoko brand that caters to the female section of the biking communities around the world with fashionable cycling and travel clothing. She got her inspiration from her dancing days when she learned that clothing for a particular activity, especially if it involves a lot of movement is that it should be breathable and movable. This led her to opt for a course in the designing school and after graduating from the same in the year 2001 she combined her ideas to the apparel line. She came up with functional and breathable material that offered both breathability and beauty.

9. The Soap Distillery by Danielle Martin
Danielle Martin was disappointed with the lack of natural bathing products when she went looking for the same in the local grocery store in the wake of the 2000’s. She was bored to the death by the same selection of age-old perfumes and scents. So she started off by mixing her knowledge of craft cocktail mixing with that of the art of making soaps. Her brand The Soap Distillery is known for making customized bathing bars that she makes by herself after she melts vegetable oils and butter and mixing the same with water and caustic soda. She then adds fragrance which is not your typical smell and essence. Options like vanilla, bourbon etc are the ones that make her products both quirky and attractive.

10. Bent Basket by Faris Elmasu
He was watching his dad all the time taking things apart and putting them back together. As an engineer by profession, he had his hobbies. Well, as the saying goes, ‘the apple doesn’t fall far away from the tree’, Faris began joining his father in his feats and the two sometimes went on hours in their activities without even taking a brief break! By the time Faris entered his college days in the year 2006, he felt he was made for the industrial design program. While brainstorming for an idea for his semester project, he came up with an idea that would help him stop looking for a fix for his age-old problem, a light and durable basket for his bike. He came up with the product the Bent Basket. He worked on the concept and developed a prototype by using an advanced process called bent lamination where thin pieces of wood are glued together and press molding them into form. The basket is equipped with elastic straps that keep the cargo in its place no matter the surface of the road or the terrain. He patented the basket and later on it came to be an instant hit worldwide.